You know you’re in for a treat when your golf adventure begins with the high temple of South African golf at Fancourt and ends at the very special Legend Resort – home to the Extreme 19th. Packing in several more courses of mouth watering variety, this vacation promises to leave you awestruck by Mother Nature at her pristine best as well as the wildlife on fairways that you can only find in South Africa! And we’re not even done yet. Take a cable car ride to the top of Table Mountain for unparall 360° views of the Mother City. Explore the rolling vineyards of the very famous Stellenbosch Valley with some elegant wine tasting and cellar tours at historic estates. Venture deep into the African Bush aboard open air vehicles in search of the Big 5. Sample gourmet cuisine at the swankiest of restaurants or dine under a star studded sky in the outdoor Boma with lion’s roar in the background! We are pretty sure this is a vacation that you will be talking about for the rest of your life! 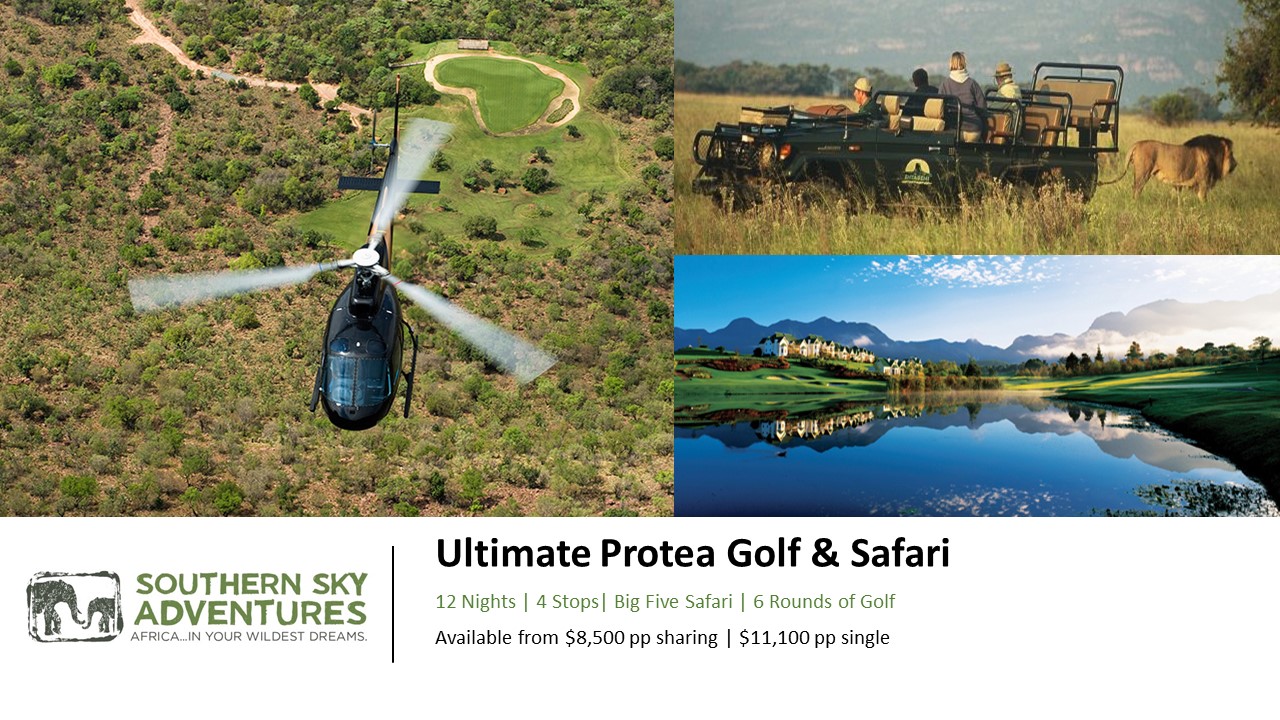 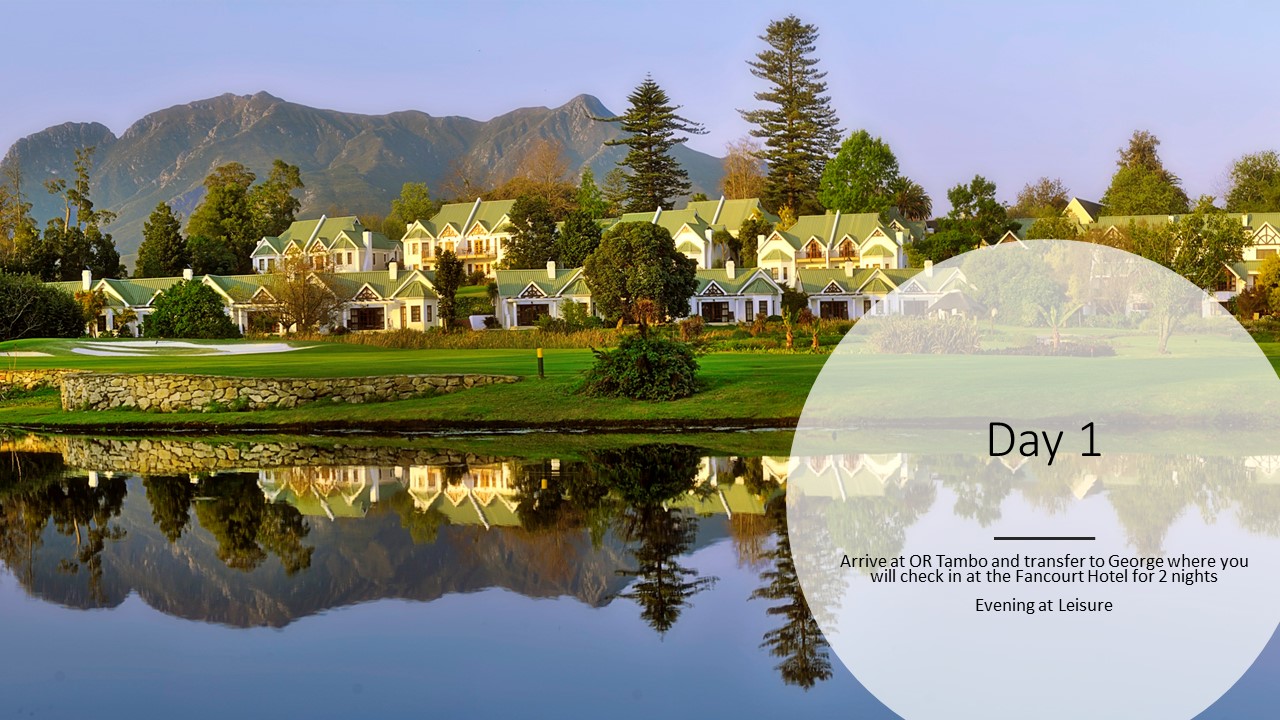 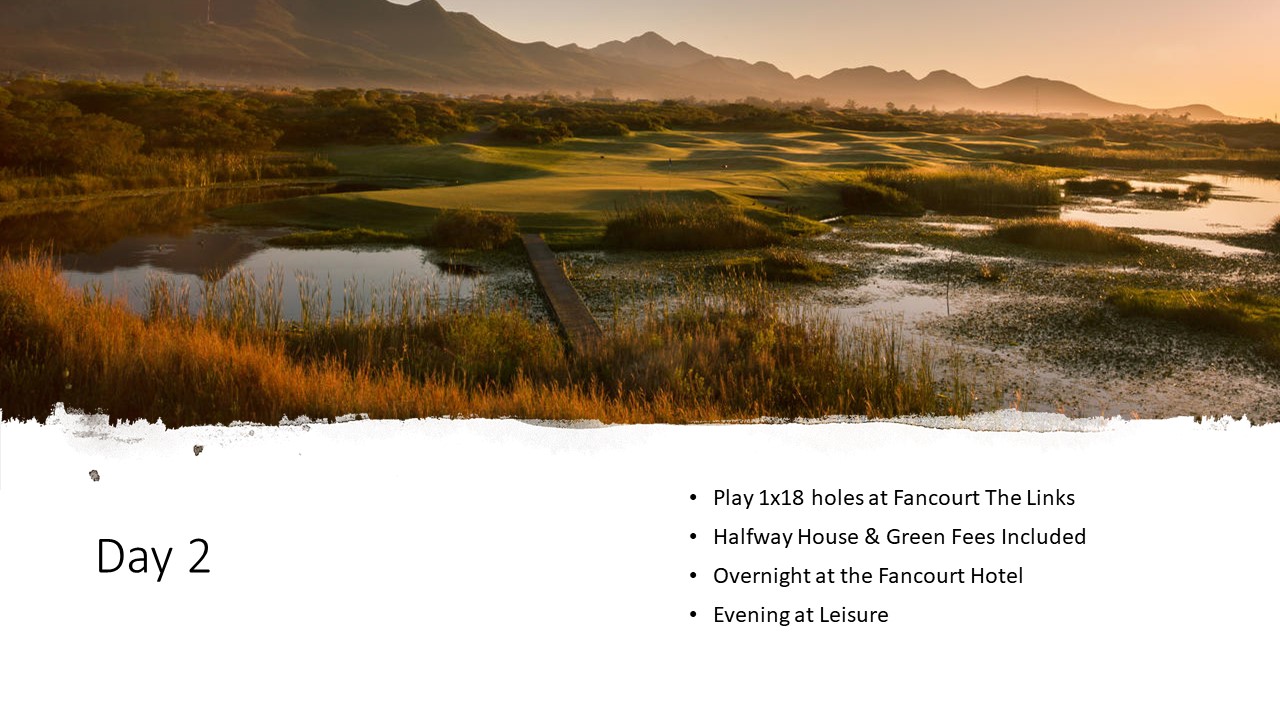 An inland-links style challenge to test the best in the world is how the Fancourt Links was visualized at its conception. Designed by the legendary Gary Player and considered to be his design masterpiece, the Links at Fancourt recreates the classic courses of Scotland and Ireland in a typically South African setting with the majestic Outeniqua mountains serving as a dramatic backdrop.  Conceived on a former airport site, the resulting aura is that of a pure links layout in spite of its inland location, with only the climate and the mountains serving as reminders that the golfer is not in the British Isles. Having hosted the 2003 Presidents Cup (which ended in a dramatic tie between Tiger Woods and Ernie Els with Nelson Mandela in attendance) and the 2005 SAA Open, playing at The Links is a very, very special experience.

Voted the number one golf course in South Africa in 2000, the Montagu Golf Course at Fancourt is named after the mountain pass of the same name, and is part of the original 27-hole design at Fancourt by the legendary Gary Player in the early 90s. This classic tree-lined parklands layout underwent a major facelift in 2005 under renowned Scottish golf architect David McLay Kidd. The upgrade saw two completely new holes – the 1st and the 9th., redefined bunkers and greens and introduction of several water features such as the dam. Celebrated for its immaculate, round the year conditioning, the Montagu GC is currently ranked at #6 in South Africa (Golf Digest, 2014). The signature hole is the Par-3 17th, reminiscent of the 12th hole at Augusta National – the permanent home of the US Masters. 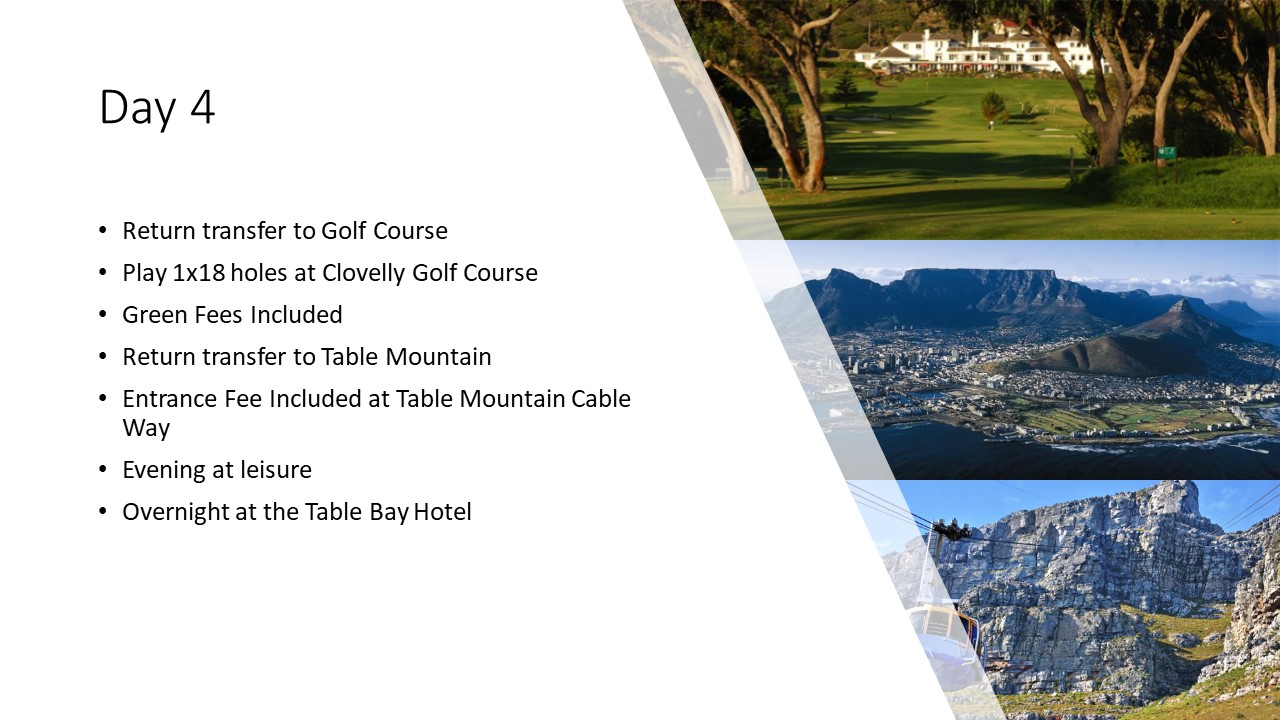 Nestled in the tranquil Silvermine Valley between Fish Hoek and Kalk Bay, the Clovelly Country Club rewards accuracy off the tee and provides players with scenic views of the False Bay coastline. Known for its year round conditioning, the relatively short course possesses a unique character by virtue of its proximity to the sea. The dune lined fairways lead to excellent bent grass and poa annua greens; while the many trees create shelter from the strong summer sea breeze. The rolling computer-irrigated fairways complement visually pleasing water features, which impact the 1st, 10th, 15th and 17th holes. The signature hole is the 4th, a par-4 with out-of- bounds and a stream on the left, and a green guarded by a water hazard. The clubhouse presents a high vantage point not only of the 18th hole, but also the 1st and 10th which both feature sharp doglegs, to the right and left respectively. 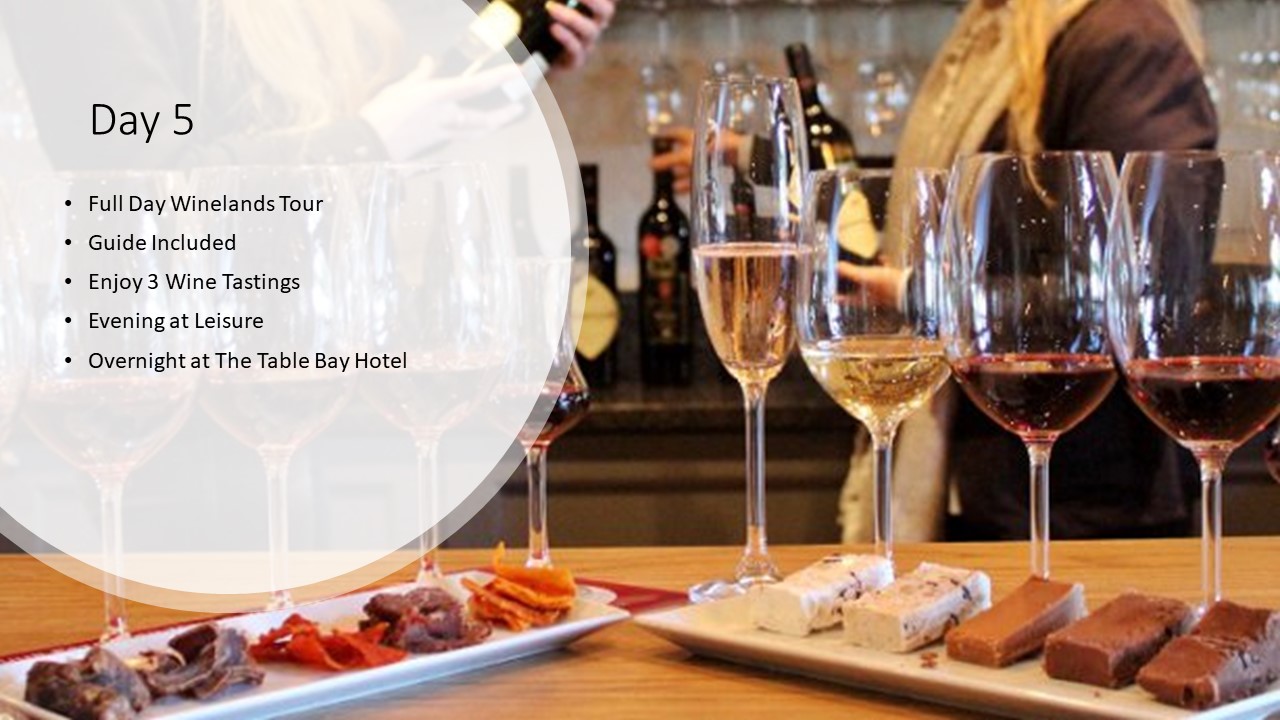 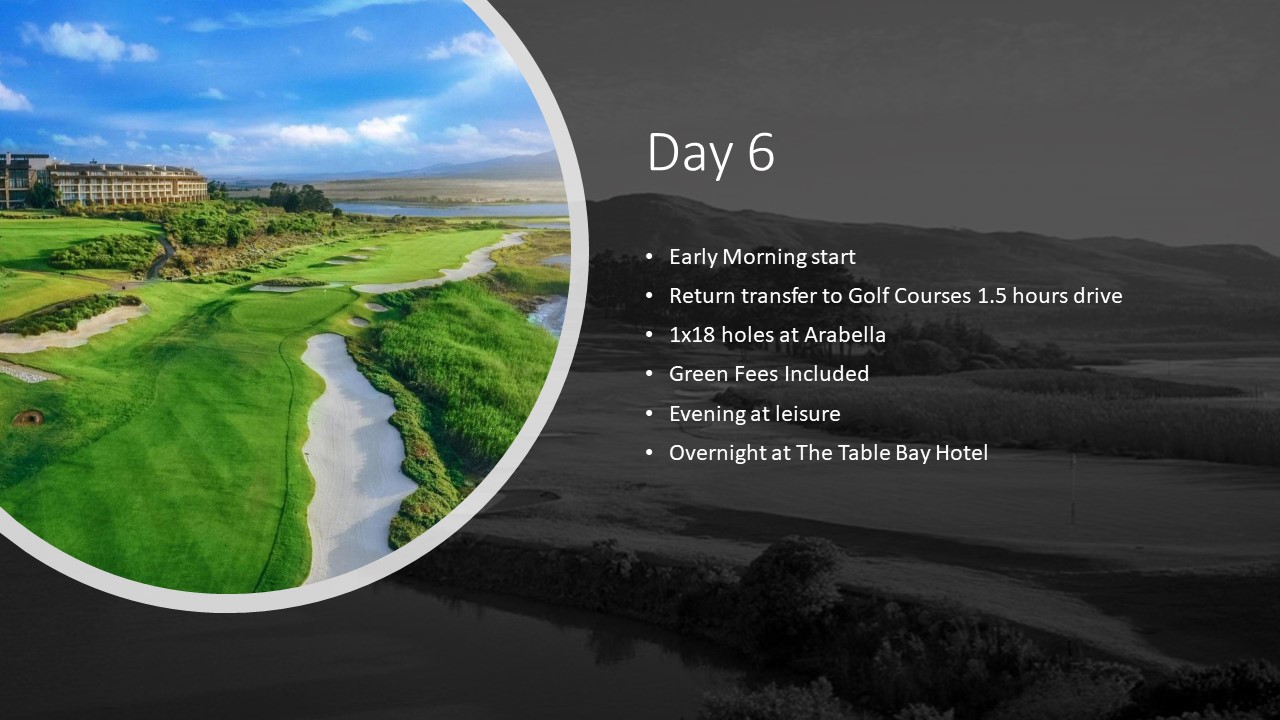 Ranked as the 4th best course in South Africa and #1 in Western Cape, the Arabella parklands course hugs the Bot River lagoon with spectacular views across the Kogelberg mountain range. Designed by the acclaimed Peter Matkovich, this spectacular layout opened in 1999. Home to the annual Nelson Mandela Invitational Tournament since 2003, a Gary Player charity initiative, it has hosted Jack Nicklaus, Samuel L Jackson, Ronan Keating and several other celebrities. Arabella’s well-balanced, flowing layout perfectly complements its tricky sand traps, clever water hazards, kikuyu fairways and dominant bent greens. The signature 8th hole is one of the most beautiful par-5’s ever, while the snaking Par-4 18th on the estuary’s shoreline was recently voted as the best finishing hole in South Africa. And then there’s the ‘Turn’- consisting of holes 3, 4 and 5 which like Augusta’s Amen Corner, are considered the most challenging on the course. The best part- a par gross score on the Turn wins a complimentary round of golf! 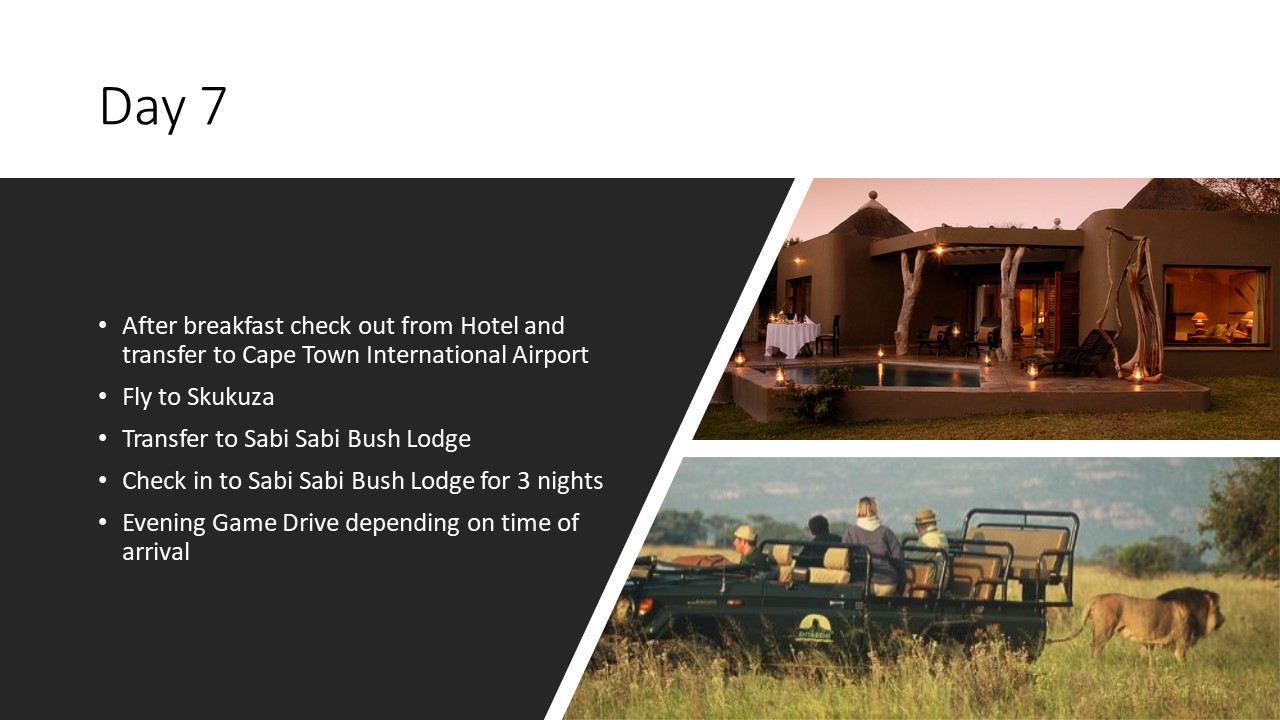 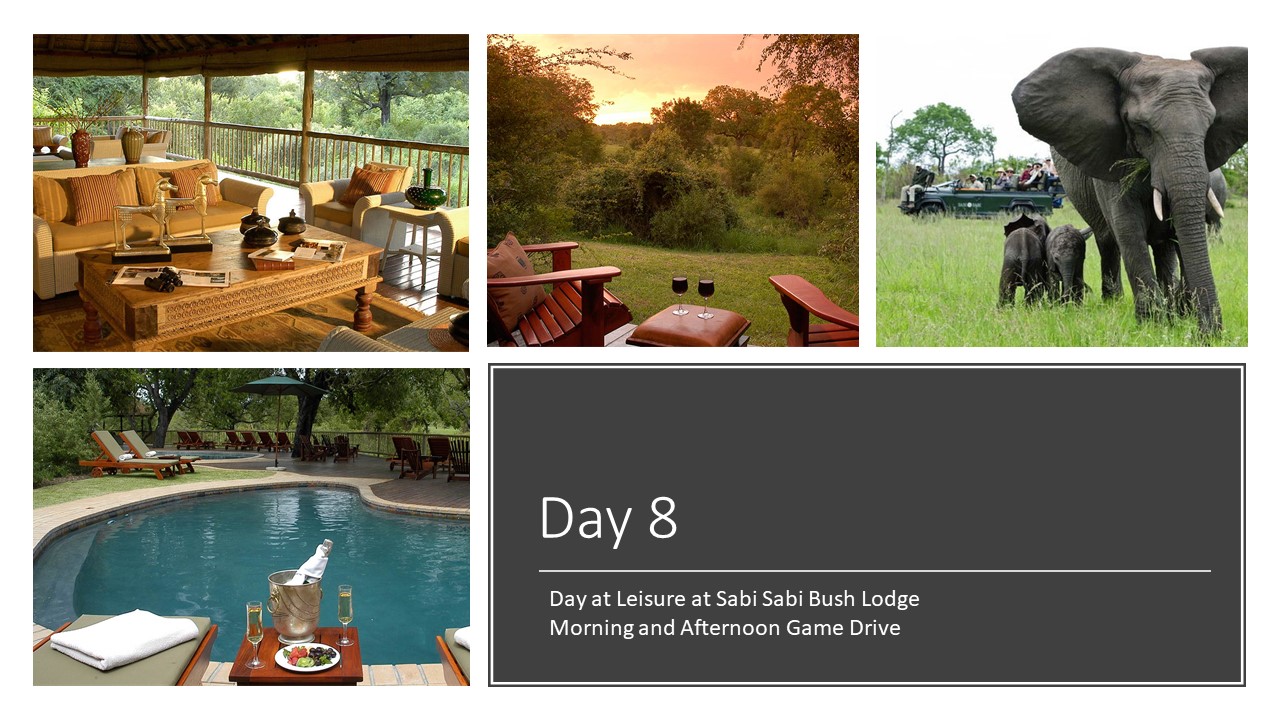 Internationally recognised as a world class golf course, Leopard Creek, designed by Gary Player, is located strategically on the border of the Kruger National Park near Malelane. The course typifies the essence of African golf at its best with indigenous bushveld bordering the pristine fairways and greens. The course has hosted many PGA professional tournaments including the well known South African Sunshine Tour. Home to the annual Alfred Dunhil Golf Tournament, this wonderful layout has numerous animals strolling on the fairways. It’s common to hear a buffalo snort or see a giraffe near the fence on your drive, while the pitch shot might need a hit over a lake full of crocodiles and hippos. The clubhouse, filled with golfing memorabilia, is one of the best in all of Africa: an extraordinary piece of architecture with a thatch roof.

Designed as a championship layout with wide fairways and USGA standard greens, the Signature Golf Course is a unique world-in-one course where each hole is designed by one of the world’s top golfers. Representing amazing diversity from four continents, this collaborative
masterpiece offers all golfers the flavor of a true African challenge. With game like zebras, wildebeest and warthogs meandering freely on
the fairways that wind through open grassland and dense bush, a round on Signature GC makes every shot a very special experience. The Par 72 Signature Course is the longest golf course in South Africa, providing all golfers, irrespective of their handicap, the experience of a true African challenge. The course has flowing fairways which meander through the open grasslands and dense bush. The bunker style has been standardized throughout with no hidden hazards to negotiate, just as the pros like it. The sheer scale of the golf course, with gently undulating greens and strategic bunkering ensures a unique golfing experience with breathtaking views of the Waterberg Mountains as a backdrop. 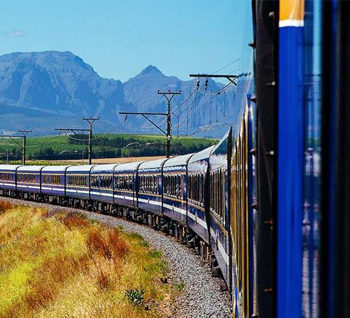